So we have continuing revelations, embarrassing to the Obama administration, coming out of the Libya scandal. Figuring out what happened was pretty easy for those of us who understand the Left and understand Obama. I continue to follow it, not so much to help learn what actually happened that day, but to measure the character of reporters and members of the administration.

For example, I am comparing the response of the major establishment media outlets. CBS, NBC, ABC – they are ignoring the story in what seems to be a desperate attempt to prop up Obama for the election. It’s abject corruption. I believe, though, that CBS has helped break some of the news, so maybe they are a little less corrupt than the others.

I was surprised to hear Kirsten Powers, columnist for The Daily Beast, break with the administration and show some indignation over the Libya affair, as I have heard her comments on the Special Report All Star Panel. I now have more respect for her opinions. But Charles Lane, also a frequent guest on that panel, would not allow any daylight between him and the administration’s lies.

And Candy Crowley from CNN apparently has no shame. Here’s how I view her dust-up with Mitt Romney in debate #2. She is charged with being the impartial moderator. Not only does she breach the trust handed to her by brazenly inserting herself into the debate, but at the moment when Obama is cornered with his lie about Libya, she throws him a lifeline.

Anyone who had been following this story very closely at all knew at the time of this town hall debate that the Obama administration had been changing its story. That’s why you have the “deer in the headlights” look on Obama’s face when Romney asks him to repeat the lie, that he had been calling this a terrorist attack from the beginning. Here is a snapshot of that moment in time: 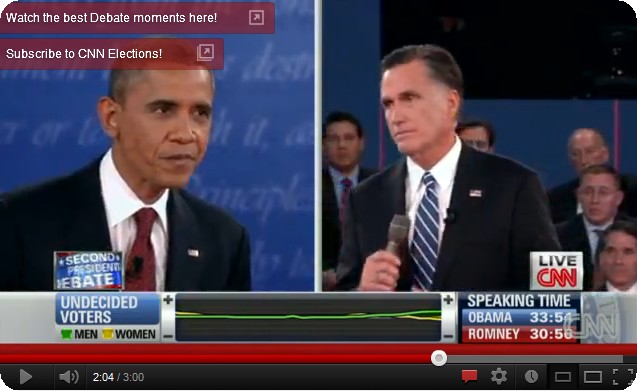 Look back at this excerpt of the debate. Romney confronts Obama at the 1:45 mark. Obama clearly knows he has been caught because he refuses to answer Romney’s question. The body language, the tone of voice, the words he chooses – the guilt is just oozing out here. And then Candy Crowley comes in an rescues him with a lie of her own.

Here is the video of the entire exchange. View especially from the 1:45 mark to the 2:12 mark.

I lived through Watergate. I had worked for the Nixon campaign and was Chairman of Utah Youth for Nixon in 1968. It was painful to see a great man fall and embarrassing for me to have had a part in it. But the differences between that scandal and this one are stark. There you had one man, Richard Nixon, who was left almost alone. The media and even his own party would not defend him. But here in this Libya scandal, we have the entire media establishment joining in the crime. And no one died in the Watergate scandal. Here, not only have we had four people killed already, but we have all of the co-conspirators participating in the undermining of our national security, putting our entire nation at risk. It is amazing to watch.

By Dr. David Hall. Dr. Hall runs Infinity Dental Web, a small company that does Internet marketing for dentists. He has had a long-standing interest in politics and as a college student toyed with the idea of a political career.
View all posts by mesasmiles →
This entry was posted in Libya, Terrorism and tagged Candy Crowley, Charles Lane, establishment media, Kirsten Powers, Libya consulate attack, Nixon, Presidential Debate, town hall presidential debate, Watergate. Bookmark the permalink.