So we’re seeing the “Got Insurance” ads, marketing Obamacare. Some are appalled by the blatant sleaze. But no one should be surprised. Here’s one of the ads people are talking about: 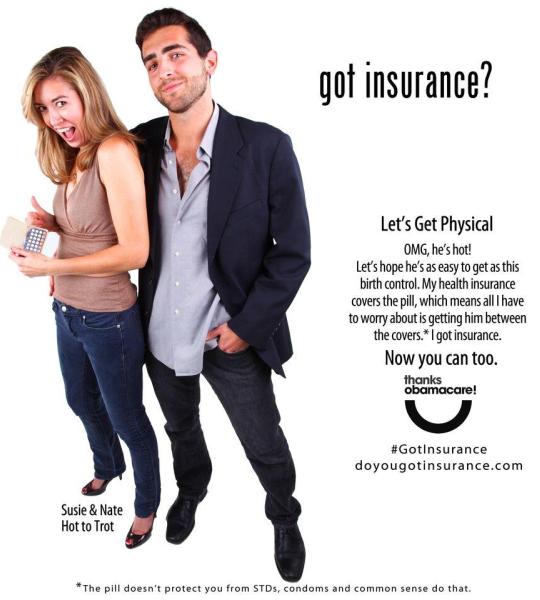 But it’s not what the ad says, directly, but the underlying message that I want to focus on.

This was part of Terry McAuliffe’s strategy for defeating conservative Ken Cuccinelli in last week’s Virginia governor’s race. Overtly, it was an empty accusation that Ken Cuccinelli was going to take away their birth control pills. Of course, there’s no way a governor could do that. The real message of the Democrats in that race was, “You don’t want a governor who is a family values man. He doesn’t approve of your promiscuity. We Democrats not only tolerate it, we encourage it and want to make it as easy for you as possible.”

Here’s what is going on. When you violate the law of chastity, your conscience bothers you. You have to deal with that somehow. In that context, the message of Democrats is one to soothe the afflicted conscience and to try to identify their opponents as people who would make you feel uncomfortable with your lifestyle. They may not actually be able to do anything about that lifestyle, but they will make you feel uncomfortable. So yes, the argument on its face is stupid. You can get a prescription for birth control pills for four bucks. It’s not that Obama is giving you something you can’t get for yourself. Besides, young people are going to pay through the nose for that insurance policy that gives them free birth control pills. It’s not the money—it’s that he’s winking at you as you take the girl back to your bedroom. He approves, where that religious guy reminds you of your nagging conscience. This is why Obama made such a big deal of Sandra Fluke – she wanted Obamacare so she could get free birth control pills. And now millennials are being asked to trade their liberty and money for a little comfort for that nagging conscience.

In times past, the march of evil has usually been more subtle. Now it’s getting more obvious, easier to tell the good from the evil, though some people are still blind to it. But look at the agenda of the Left, the agenda of the Democrat Party:

Clearly, this is the forward march of evil. And this ad should hopefully clarify that.

By Dr. David Hall. Dr. Hall runs Infinity Dental Web, a small company that does Internet marketing for dentists. He has had a long-standing interest in politics and as a college student toyed with the idea of a political career.
View all posts by mesasmiles →
This entry was posted in Obamacare and tagged free birth control pills, free condoms, health insurance, Ken Cuccinelli, Sandra Fluke, Terry McAuliffe. Bookmark the permalink.