My analysis of the fiscal cliff vote and John Boehner’s future.

The lead article on the Drudge Report this hour is about whether or not Boehner will keep his speakership, and there is a poll on the right side asking “John Boehner for Speaker of the House?” I voted no, and I am in the vast majority of Drudge fans on this. 84% agree that he should go. I hope members of Congress notice this. (Drudge is set up to disallow repeat votes, so this is somewhat of a measure of the breadth of the disdain Drudge readers have for his leadership.)

Here are screen snippets of the poll question and the results: 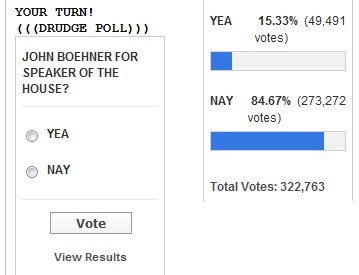 Here’s my analysis of these fiscal cliff votes.

1. If congressional Republicans don’t have the guts to stand up to Obama on this, they don’t have the guts to stand up on anything. This was a manufactured “cliff,” and wasn’t really a cliff at all, it was more a “fiscal pothole.” The country is careening toward fiscal disaster, and it is because of unsustainable levels of spending. It is questionable whether we can even raise taxes enough to cover current levels of spending, which are nearly double current levels of revenue. If Republicans can’t stand up for fiscal sanity in the face of Democrat intransigence over this, they won’t stand up for anything. They’ve been “rolled,” and it looks pathetic.

2. Boehner is in trouble. That’s why he let Mitch McConnell carry out these final negotiations, to minimize his fingerprints on this deal. Thus the House was faced with a bill that the Senate sent them, and Boehner could just pass it on to the House. There must be a movement afoot to unseat him as Speaker.

3. There is corruption in Republican congressional leadership on both the House and Senate sides. I am convinced that their object was to let this go to the brink and craft the most liberal proposal that they could get Republicans to vote for. Both McConnell and Boehner, I believe, are playing their caucuses in this manner, giving them last-minute ultimatums – either swallow this bitter pill or get blamed for catastrophe.

Here are all the things they could have done:

1. Object to calling January 1, 2013 the “Fiscal Cliff.” They could have pointed out that we are headed for a true fiscal cliff, with the ballooning federal debt, fueled by levels of spending unheard of before in human history.

2. Suggest that one solution could be to simply sunset the 2009 stimulus. It didn’t work, anyway. But the spending it authorized has now become part of the baseline. Just sunsetting this monstrosity of a spending bill would sound reasonable to a lot of people and would be a little bit awkward for some Democrats to defend.

3. Point out that to solve the deficit with increased taxes would involve having to double current tax rates on everyone. And even that really wouldn’t work because that would dampen the economy so severely it is questionable whether that would result in any more actual revenue to the treasury.

4. Accuse the Democrats of wanting to go over the fiscal cliff, as long as they could  blame Republicans. After all, they voted against those “Bush tax cuts” when they were enacted, so they clearly support that level of taxation.

Boehner, 84% of Drudge fans think you should go. Let’s get someone in that position who is passionate about Republican principles.

By Dr. David Hall. Dr. Hall runs Infinity Dental Web, a small company that does Internet marketing for dentists. He has had a long-standing interest in politics and as a college student toyed with the idea of a political career.
View all posts by mesasmiles →
This entry was posted in Budget, Congressional Republicans and tagged Drudge Report, fiscal cliff, fiscal pothole, John Boehner, Mitch McConnell, Speaker. Bookmark the permalink.