Politeness – contributing to the demise of the Republic

Posted on February 6, 2015 by mesasmiles

One of the news items on Drudge last Sunday was about the Sundance Film Festival. It seems that the movie 3 1/2 minutes won the Special Jury Award for Social Impact. This is a movie about the shooting of 17-year-old Jordan Russell Davis, and African-American high school student, for which white Michael Dunn was later convicted of first degree murder and is currently serving a life sentence in Florida.

During the awards, Jordan’s father was there, and in his remarks he implored, “Black lives matter,” which was received with a standing ovation.

So in this country it has become chic to inflame racial tensions. “Black lives matter” is now the rallying cry for blacks hating whites, and it is fashionable to join the rally. (Read my other posts about socially acceptable racism.)

Here’s my perspective on all this. Let me start by saying that I know little about Jordan Davis—only what I read in Wikipedia. But I do know about the recent cases of Eric Garner on Staten Island and Michael Brown in Ferguson, Missouri.

There are elements in our society who actively want to stir up racial hatred. There are the Al Sharptons and Jesse Jacksons who profit financially from the race industry. And then there are the politicians and political activists whose political agenda includes generating strife and mayhem. For those who are truly sincere about wanting to reconcile the police with the black community, there is a clear way to do that, and that is to combat these voices that want to stir things up.

When Michael Brown robbed that convenience store in Ferguson, Missouri, and was caught by the police, he had already been stirred up with enough hatred and belligerence that his instinctive reaction was to try to kill the police officer. When you dig into the reliable evidence about the shooting, it is clear that officer Darren Wilson had to defend himself or he would not be alive today. But the whole incident has been clouded by the voices of strife and hatred. The lie that Michael Brown held up his hands and said “don’t shoot,” even though it was thoroughly disproven by the forensic evidence and eyewitnesses, is the story line and it gets perpetrated. There are many people who know the truth who simply don’t want to say it. Their excuse, I guess, is that they want to be polite and respectful to those putting forth the opposite narrative.

And then there is Eric Garner, stopped for selling illegal cigarettes on Staten Island, New York. The video records him saying, “I can’t breathe!” and we are told to be horrified that the police seemed to ignore this desperate plea for help. And this is what is trumpeted about this incident. I went to the website, “Black Lives Matter,” whose object it appears is to stir up hatred of whites by blacks. Here is a photo I found on its home page: 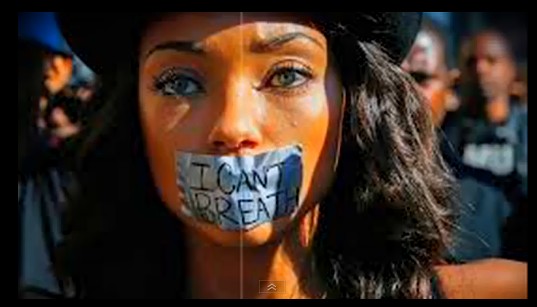 However, anyone trained in CPR, which I imagine includes these officers, knows the truth. CPR training teaches you to ignore when someone complains “I can’t breathe,” because the fact that they are able to say it is absolute evidence that they can indeed breathe. But besides this, when you dig into the story, you learn that Eric Garner did not die in the street at the hands of the police, but the police had him taken in an ambulance to the hospital, and he died on the way of a cardiac arrest.

Furthermore, it was Eric Garner’s attempting to resist arrest that required the police to get physical with him. Gawker, one of the websites trying to contribute to the stirring up of strife, even admits this. It quotes Garner as telling the police: “Every time you see me, you try to mess with me. This stops today.”

Why, in our public discourse, doesn’t the truth of these incidents prevail? Someone who truly wanted to reduce tensions would tell black communities, “Don’t resist arrest. Don’t rob convenience stores. Don’t try to kill the cop. There was no racism in the actions of the police–everything they did could be rationally explained.” Eric Garner’s arrest was supervised by a woman officer who was African-American. Was she racist? Eric Holder’s justice department was unable to find any evidence of racism in the Michael Brown shooting.

Our society is going to have to put up with the Al Sharptons and the activists who want trouble. I’m not speaking to them. But all you other people who are tolerating this–Why? I ask you. Your politeness, if that’s what it is, is causing police officers to simply ignore neighborhoods where there is a lot of black crime. It is stirring up assassinations of police officers and mayhem on the streets. Stand up for the truth. This hatred is a self-perpetuating cycle that grows in intensity with each round of incidents, and it is tearing apart portions of our society.

By Dr. David Hall. Dr. Hall runs Infinity Dental Web, a small company that does Internet marketing for dentists. He has had a long-standing interest in politics and as a college student toyed with the idea of a political career.
View all posts by mesasmiles →
This entry was posted in Racism and tagged Black lives matter, don't shoot, Eric Garner, Ferguson Missouri, I can't breathe, Jordan Russell Davis, Michael Brown, socially acceptable racism, Sundance film festival. Bookmark the permalink.