In Mark Levin’s opening monologue in his radio show last night, he exposed how the Obama administration has cooked the books, manipulated the numbers, in order to be able to boast that they have deported a record number of illegal aliens in 2011.

To put this “record” in perspective, here is a graph of those removals. Notice that the real story is not the record number but that suddenly, under the Obama administration, the rate that was steadily increasing under Clinton and G.W. Bush has plateaued. 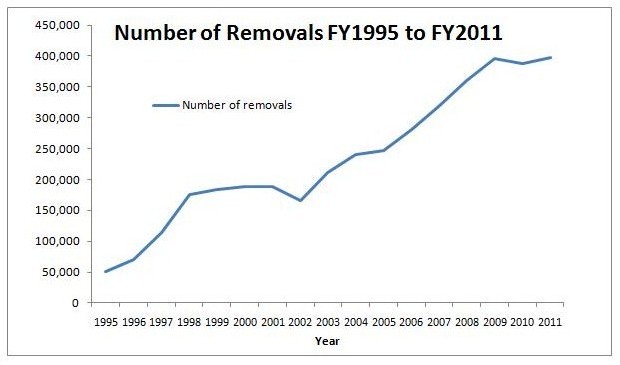 But there are some manipulations that were used to even get this number. A story in the Washington Post reveals the details. First, in order to reach this “record” of 392,862 removals, ICE included more than 19,000 immigrants who had left the previous fiscal year. Furthermore, as they approached the end of the fiscal year in September, realizing that they would fall short of the 2009 numbers, which was the standing record, internal e-mails show that the department encouraged officials to offer immigrants a “voluntary return” option. Under this option, eligible foreign nationals could return briefly to their home country without any black marks on their record. Where their typical practice would have been to release illegals on their own recognizance, they kept them detained and then offered them the voluntary return option, until the desired number was achieved. Once it was achieved, they reverted to their normal practices.

All of this makes much more sense than what the administration and its cheerleaders in the establishment media are saying. We know that Obama does not want to enforce immigration law. But in true Leftist style, they don’t want that to be too apparent to the casual observer. It’s the combination of the casual observers, together with the administration’s radical supporters, that they are counting on to keep them in office.

By Dr. David Hall. Dr. Hall runs Infinity Dental Web, a small company that does Internet marketing for dentists. He has had a long-standing interest in politics and as a college student toyed with the idea of a political career.
View all posts by mesasmiles →
This entry was posted in Illegal Immigration and tagged deportation records, ICE, Obama, voluntary return. Bookmark the permalink.