I’d like Scott Walker to get back in the race

The only viable candidate left in the race who has integrity, Ted Cruz, is getting smeared so awfully that it appears to be killing his chances.

Some of it is his own fault.

Back when he stood up on the Senate floor and called Mitch McConnell a liar I thought it was a remarkable act of political courage. Yes, he was right. But he made so many enemies it seriously damaged his chances at the presidency. In that act, and in others, he didn’t need to be so strident.

Don’t get me wrong. I greatly admire him. But for the sake of later wanting to become president, it would have helped if he could have picked his battles more carefully. While he has fans in the Senate, no one dares endorse him because of fears of repercussions.

And, on the other hand, I see Donald Trump and Marco Rubio giving full display to their lack of integrity by smearing him–calling him a liar when he is actually the one telling the truth.

Back in the old days, integrity used to matter in a candidate. But now I see people whom I admire who put the highest priority on the positions that someone takes and will only worry about integrity when the candidate takes positions they don’t like. I see this in Mark Levin and others. 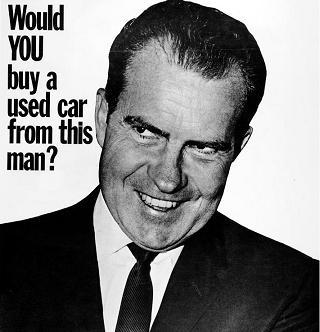 Democrats produced a poster of Richard Nixon with the slogan on it, “Would you buy a used car from this man?” That was back when integrity in a candidate seemed to matter to most people. Not so today. As long as they espouse what they consider the correct positions, too many people seem to be willing to turn a blind eye to that. They’ll demand honesty in their used car salesman, but not in their candidate for public office. Democrats threw that standard out a long time ago, and many Republicans are going down the same road.

Scott Walker, would you consider getting back in the race?

I view Scott Walker as a man who does have political courage, a decent man of faith and principle but who hasn’t made enemies like Ted Cruz has. Someone I would feel proud to vote for and an accomplished leader. I’m sorry—I do not feel that way about either Marco Rubio or Donald Trump. I think Jeb Bush, for all his weaknesses as a candidate, is also a man of integrity. But he has now bowed out of the race. I believe Ben Carson has integrity, but his campaign is going nowhere.

Maybe, if the race becomes deadlocked, the establishment and conservative wings of the party could unite around Scott Walker. I think he could do it.

By Dr. David Hall. Dr. Hall runs Infinity Dental Web, a small company that does Internet marketing for dentists. He has had a long-standing interest in politics and as a college student toyed with the idea of a political career.
View all posts by mesasmiles →
This entry was posted in Republican Presidential Candidates and tagged Ben Carson, integrity in candidates, Jeb Bush, Mark Levin, Mitch McConnell, political courage, Richard Nixon, Scott Walker, Ted Cruz, would you buy a used car from this man?. Bookmark the permalink.