On one level it’s amusing. On another it’s sick. On yet another level it’s scary – this way we’re being asked to view Obama, to suspend reason.

It comes up anytime there is possible criticism of Obama. This time it was over this photo of Obama cavorting with the blonde Prime Minister of Denmark, Helle Thorning-Schmidt: 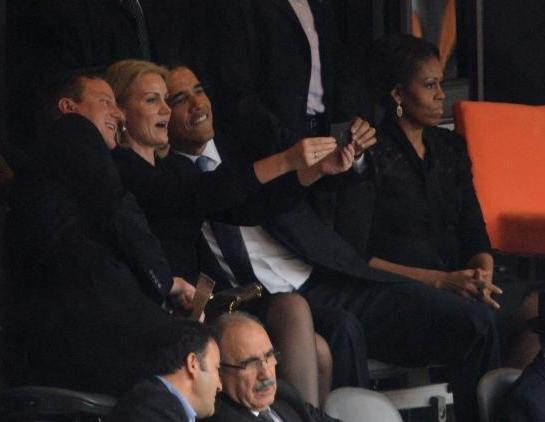 The New York Daily News called it a “funeral faux pas” and said that Michelle looked annoyed. In fact, later photos show that during Pres. Obama’s remarks, Michelle moved over so that when Barry returned, she was separating him and the Danish blonde. And then let’s not overlook the picture of Obama kissing the Prime Minister. Oh, what did you think of that! Look at his hand on her waist! 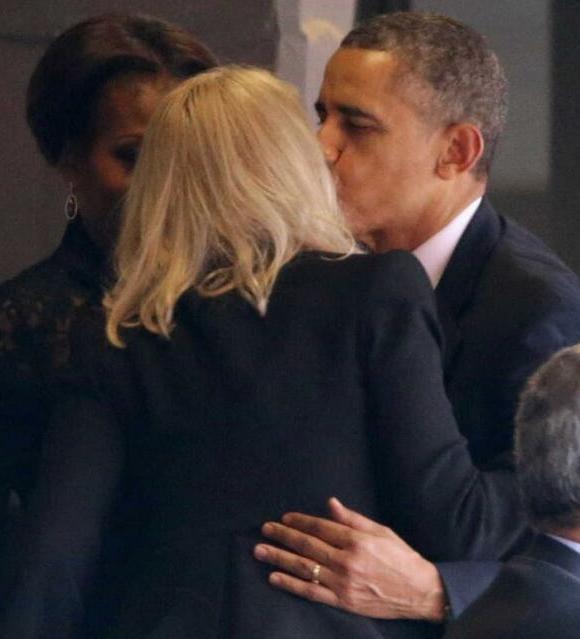 But no, we are told, don’t believe your eyes.

Yesterday, in USA Today, Roberto Schmidt, the photographer who took the picture of the selfie tells us, “Photos can lie.” He goes on to explain that, while Michelle may look angry in this photo, she wasn’t really. The photo was just a moment in time, and if you could see the “just before” and the “just after” you would see that she wasn’t angry. Really, Roberto? The problem with that theory is that I still have a brain of my own and I use it. Run a Google image search for “Obama selfie Helle” and you’ll see at least a half dozen different shots of the three of them, and Michelle looks unhappy in every one of them. And in all but one, Barry and Helle are apparently having a great time. And, in the only one where they are more serious looking, which is the image below, notice how Barry is sidling up to Helle, moved over to that side of his chair, and leaning toward her. Measure it – there is over 60% more space between him and Michelle than between him and Helle. 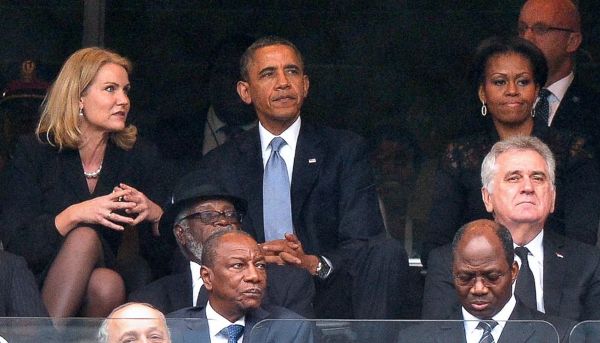 But what takes the cake is an article that appeared Tuesday on Salon.com by Roxane Gay that tells us that the reason Michelle looks angry to us is not because she actually looks angry, but because of our racial biases. If Michelle were white, according to Roxane, she would not look angry.

As I said, thinking that way is downright humorous. But it is also sick and very scary. There is a sizable group of people who actually think this way, who make excuses for The One, in whose eyes he can do no wrong, while the rest of us look on in disbelief. This is how tyrants come to power, with leader-worship. Oh, how close we are to the edge in this supposed land of the free.

Take, as another example, the lie about Obama never having seen his uncle, the one who was nearly deported. When Uncle Onyango got into trouble, the White House put out a statement that the two had never met. Then, oops, Uncle Onyango said that Barry had actually lived with him while he was attending law school. The White House then corrected the story, with the excuse that this question had been answered by the staff, and no one had actually asked the President. While those of us who think for ourselves realize that this is utter hogwash, the White House clearly believes, and I think they are right, that a sizable portion of the populace will believe the ridiculous, fabricated story that White House aides decided that since Uncle Onyango wasn’t mentioned in Barry’s biography, that the two had never met. Biographies, after all, list all the people the biographee has met – everyone knows that, right?

Yes, we’re in a sad, sad way, when reality is bent to this degree, to accommodate The One. How easy it would be, in this climate, for a president to assume dictatorial powers.

By Dr. David Hall. Dr. Hall runs Infinity Dental Web, a small company that does Internet marketing for dentists. He has had a long-standing interest in politics and as a college student toyed with the idea of a political career.
View all posts by mesasmiles →
This entry was posted in Obama and tagged Danish Prime Minister, Helle Thorning-Schmidt, Mandela memorial, Obama funeral selfie, Obama lies, Obama selfie, Obama's uncle, Onyango Obama, Roberto Schmidt, Roxane Gay. Bookmark the permalink.